*This series will be a 2 post series. Check back next week for part two!

I can’t even begin to tell you how excited I was to start this unit. I remember my rock collection as a girl. Our neighbor had a bed of river rock in their garden and I would spend hours digging through it always looking for just the right specimens. I imagined finding a glorious Indian arrowhead or a real dinosaur fossil. I would pour over the limestone that made up part of our wall in the front yard and carefully pick out chunks of rock that did have fossils in them. My imagination of what part of the dinosaur it might be from was far superior then the actual fossil sea shells they actually were. I remember combing the shores of a nearby river on family fishing trips searching for pieces of fool’s gold. I remember visiting a real cave and being mesmerized by the stalagmites and stalactites. I couldn’t wait to share this love with my children. As I was pouring over books and settling on activities, my husband would sigh and say, “Are you ever going to be done working?” But all I could think was this is not work! 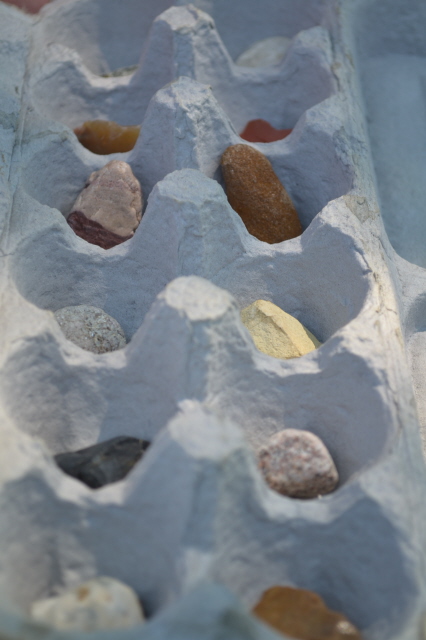 Our school mission: head to the park and collect rocks. Use recycled egg cartons to hold specimens. Collect only 12 of the most interesting ones you can find. Head back home to identify and classify. 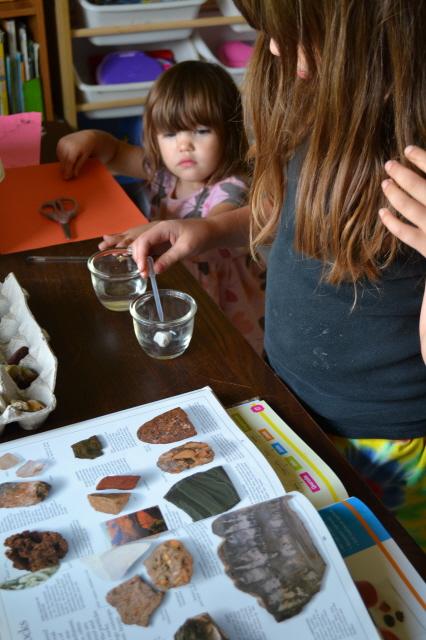 The first thing we did was sit down and try to identify all the cool rocks we found. We have two wonderful field guides for this that the kids used: Smithsonian’s Rock and Gem and Eyewitness Rock and Minerals. I believe the kids classifie about 75% of their rocks and are still trying to figure out what the others are. This part was by far their favorite part of the week! Part of our identification came in the form of vinegar tests. Apparently any rock that has a bit of carbonate in it (think calcium, baking soda, chalk) will fizz when drops of vinegar are applied. Lily had great fun with this experiment. 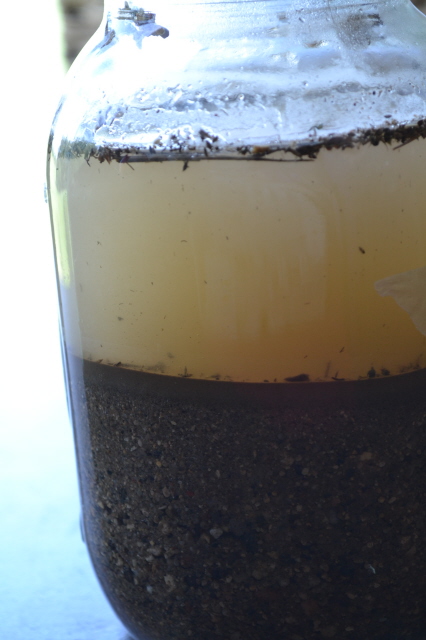 Next we discovered how sedimentary rock is formed. We watched the Magic School Bus video on erosion (see below) and then did our own experiment in a mason jar. Fill jar with dirt (sand, soil, rocks) and water. Shake and let sit for an hour or two. Discuss the layering that happens.

We also talked about the layers of the earth. We listened to the kids favorite song (haven’t forgot the layers yet!) and watched this video:

Then we did a hands-on experiment to show how this works. We filled a tub with water (our liquid, moving magma mantle layer) then set pieces of wood to float on top (our continents, or earth crust). I showed how even not touching them they were always moving just slightly on the magma because of a solid floating on a liquid. This transitioned beautifully into a discussion on plate tectonics and how they work. We practiced butting the wood pieces up against each other in different directions to see how direction of force changed the outcome. 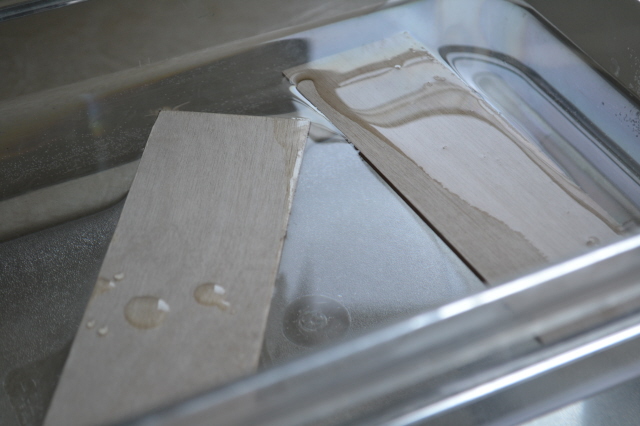 This led beautifully into a discussion on how mountains were formed. We used clay to showcase this phenomenon. We layered colors (our rock) into two long strips and then pushed them against each other until they buckled and folded causing both a mountain and the layers we so often see in rocks.

We also discussed climate change and how that affects the earth’s crust. The ice weighs down the crust sinking it deeper into the magma and then, during time of warming, suddenly (or violently) lifts back up to the surface again. Pretty cool stuff that I’ve never thought about before. 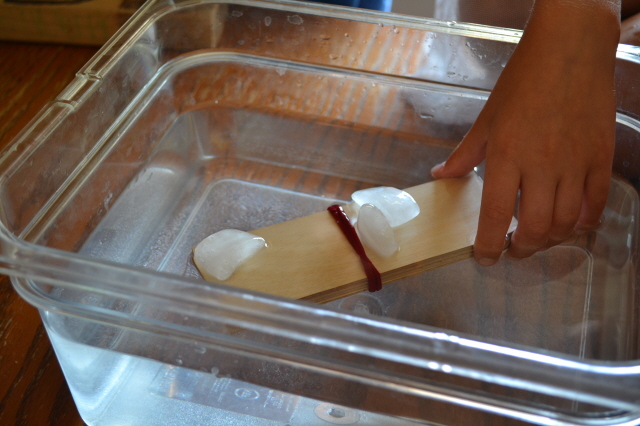 All this talk of plate tectonics led to a natural discussion of Pangaea. I had the kids trace the continents with tracing paper and then cut out their own Pangaea puzzle. They first had to fit it together how they thought it might go then I showed them what scientists theory was.

We went to this really cool site: Continental Drift Puzzle and they were able to interactively try their hand at the Pangaea puzzle. The really cool thing about this site is the ability to rotate the continents. And you can do it how you think, you can try with a Pangaea outline, or just see how you measure up.

The main book I used as inspiration for these experiments was an older book I found at our library called Rocks and Soil by Robert Snedden.

Magic School Bus: Inside the Earth

Magic School Bus: Rocky Road Trip – this one is a chapter book that we used as a read-aloud at lunch time. It corresponds to the free lapbook below.

*Note for you creationist science moms ~ I know many people, Christian and secular, debate the young/old earth theories. You will have to deal with a lot of editing of pretty much all the books if you do believe in the young earth theory. That said, here is a wonderful source via Answers in Creation to draw from if you need.

DON’T FORGET TO PIN THIS!!!

Many people have said to me, "What a pity you had such a big family to raise. Think of the novels and short stories and the poems you never had time to write because of that." And I looked at my children and I said, "These are my poems, These are my short stories." ~Olga Masters